On Thursday, June 23, 2016, Seventy-six City of Madison commercial properties were presented with Beautification Awards at a luncheon which took place at the  Best Western

Amber Braman, Vice President for Beautification of the Madison Beautification and Tree Board chaired the awards program and luncheon this year.  Mayor Troy Trulock opened the luncheon with a prayer,   Councilman Tim Holcombe, and Council Man Gerald Clark were also in attendance at this year's luncheon.  Clark serves as the MBTB Council Liaison to the all-volunteer board of City of Madison residents appointed to serve by Mayor Trulock.  MBTB board members present were were Beth Agee, Meredith Kilby,  Hollye Raines, Liz Smith and Franklin Wetzel.

Nineteen of the properties achieved an Excellence Award for scoring 99.5 or higher on the judging sheets.  Those properties received Excellence Award plaques in addition to the certificates that all awardees received.   A minimum score of 95 is required to receive an Award.  Implemented last year into the program was a Beautification Award - Honor Roll.  Honor roll properties are those that have maintained their Beautification Award status for five consecutive years in a row.

Commercial properties apply for the award annually in the spring.  Judging of the properties takes place mid to late May by teams of board members and Master Gardener volunteers from outside the City of Madison.  This year the board emphasized the need for properties to use bolder colors in their landscapes, be it through flowering shrubs, perennials or beds of annuals.

Following the awards presentation a drawing took place for three gift certificates which were donated by The Cat Bird Nursery & Garden Shop.    Braman closed the luncheon with words of thanks to all the property owners and managers who dedicate time and resources in making the City of Madison a beautiful place to live, work and play.  Also included were remarks about future developments of the beautification program, to include all new Beautification Award signs that better distinguish City of Madison properties from the neighboring Huntsville properties, She also encouraged anyone interested in serving on the board to contact MBTB President Karen Lawler at
keepmadisonbeautiful@gmail.com

A group photo was taken of the winning recipients at the close of the luncheon. 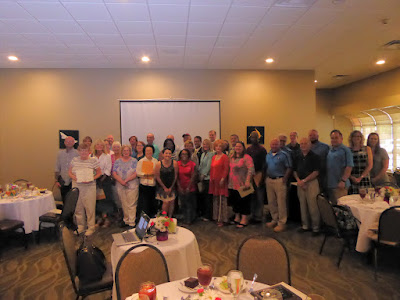 Posted by Madison Beautification and Tree Board at 2:20 PM